MY MASTER IN TESHI GOJU KAI 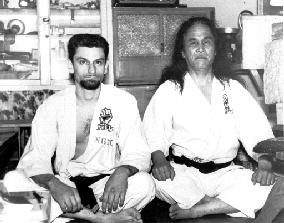 It was March, young man was preparing to board a plane in , , headed for . In his pocket, $1,000 U.S. dollars and a letter of introduction from Mr. Peter Urban to Grandmaster Gogen Yamaguchi. Lou Angel, a Nidan, was on his way to to hopefully earn the rank of Sandan.

Mr. Angel had been in the Martial Arts for nine years, and while being a serious student in a New York Dojo was no 'Day at the Beach', he was not quite sure he was ready to experience the Ueno Dojo in . How would he be received? How would his skills compare to the Japanese student? He would soon find out, because his plane was in the air, and Mr. Angel would soon begin the experience of a lifetime.

As the location of the Ueno Dojo was not widely publicized, the cab driver was unable to comply with Mr. Angel's request. Not surprisingly, it was the police who directed him to his destination. Upon his arrival at the Dojo, he approached a gentleman who appeared to be cleaning floors and presented his letter. As Mr. Angel was not quite sure he was ready to meet Grandmaster Yamaguchi, he hoped he would be told to come back tomorrow. Instead, he was asked to please have a seat and in about twenty minutes, Yamaguchi Sensei appeared. In a few minutes, in spite of a tremendous language barrier, Mr. Angel was accepted into the Dojo, and the first part of his journey was complete.
As Mr. Angel had no place to live, Yamaguchi Sensei permitted him to sleep on the floor in the Tokyo Dojo. Later, he would share an apartment with Australian Merv Oakley, the only other non Japanese studying in the Ueno Dojo at the time. While it was good for both of them to have someone to communicate with, they did not tend to pair up during training. This was due, primarily, to a strong desire on their part to work with the Japanese students.
As time was limited, Mr. Angel knew he would have to train long and hard if he were to be ready for the next Promotional Board. He would pay 1,000 yen to join the Dojo and 10,000 yen a month (about 30 U.S. dollars) for private lessons from Grandmaster Yamaguchi. The group sessions were two hours long with a 30 minute break. Mr. Angel would attend two to three sessions per day, six days a week, in addition to his private sessions with Yamaguchi Sensei.

As for Mr. Angel’s level of knowledge, to his surprise, he new more than many of the Japanese students, but they new it better. They were content to study the same Katas for years, with a high regard for mastery. What they did, they did very well. As for toughness, they were plenty tough. Especially the Sandans. These were the Sempais, and they ran the class at the direction of the Sensei. These were the ‘Top Sargents’ and there was a clear, distinct difference between their skill level and that of the 2nd degree (Nidan) black belts. When a Sempai enters the Dojo, everything would come to a halt, and the entire class would turn, perform the traditional bow, and yell, SEMPAI! As it was an important part of the Dojo ritual, Mr. Angel quickly learned this custom.

The Dojo was usually crowded with all ranks in attendance. The routine was simple and consistent... basics, movements, Katas, one point sparing and free sparing. While it was a no-nonsense workout, and relatively difficult physically, Mr. Angel did not find the environment hostile or disrespectful to the students. With that said, there was little tolerance for a weak spirit or lack of diligence. The Sempais would see to this. And if they did not, Yamaguchi Sensei would.

On one occasion, while the students were across the street sparing in the park, Mr. Angel asked a Sempai to show him the Kata Seipai. In a moment of weakness, and to be polite to the American, the Sempai agreed. The lesson was abruptly interrupted by Yamaguchi Sensei, and the Sempai was taken aside.

As it turns out, this was information Mr. Angel was not to have at his level of training. Following a calm, but stern, reprimand by the Sensei, the Sempai went across the street and proceeded to take out his frustration on the rest of the class. As they returned to the Dojo, it was evident on the faces and the uniforms of the students that the Sempai was not a happy man. Mr. Angel apologized for the trouble he had caused and was quickly forgiven.

Approximately two months before the test was to be given, Mr. Angel’s funds were depleted. He began to make plans to leave but was forbidden to do so by Yamaguchi Sensei. Instead, he was moved into the home of a Sempai. He would not leave without at least an opportunity to achieve his goal of testing for Sandan.

After a long and difficult six months, it was time to test. It was to be a group test of the entire Goju-Kai of over 100 students, performing for a Promotional Board chaired by Yamaguchi Sensei.
The routine was a familiar one in which students would test through their level of knowledge and then be seated. After the lower ranked students had left the floor, the advanced students were called out individually to perform various Katas and Bunkai. Finally, it was Mr. Angel’s turn to complete his journey.

Mr. Angel had just finished Sanseiru Kata. He looked up, and the Board that should have been directly in front of him was no where to be seen. With terror in his heart he quickly turned around and bowed. Following some minor grumbling by the Board he was asked to perform the Kata again, and again he was 180 degrees from where he wanted to be. He was in trouble, and he knew it. For a third time the Board directed Mr. Angel to perform the Kata, and again he was unable to perform it correctly.
Like a well trained soldier Mr. Angel turned quickly to face the door, lowered his head and yelled, SEMPAI!

Mr. Angel was escorted from the auditorium and placed in a small room to collect his thoughts. Instead of standing in front of his Sensei, the Sempais, and his fellow students with his Sandan in hand, he was setting in a small room, collecting his thoughts. Was this to be the ending to the story? Could it be that all of the hard work and sacrifice would be canceled out by a simple move in a Brown Belt Kata? One he had performed a thousand times.

After a short time, Mr. Angel, with his thoughts collected, was escorted back to the auditorium to complete the test and regardless of the outcome, the American Nidan had gotten his $1000 worth, and more.

As was the custom of the Goju-Kai, results were not announced following the test and Mr. Angel would have to leave the proceedings not knowing his fate. He knew his time in was at an end, and he knew there would not be another opportunity to achieve his goal.

The next day Mr. Angel returned to the Ueno Dojo, partly out of habit, and partly because he did not have anywhere else to go. It was time to face his fellow students and the Sempais that had worked so hard on his behalf. Had he let them down? Had he let himself down? He had no more than entered the Dojo when he heard that familiar yell from the students. SEMPAI! Like a well trained soldier Mr. Angel turned quickly to face the door, lowered his head and yelled, SEMPAI! His yell was late but it had attitude. He looked up, but there was no one there. He turned back to face the class.

They were yelling at him... Angel San, Sandan, SEMPAI.

Mr. Angel is a member of the Martial Arts Hall of Fame and was honored as the Soke Family of Grandmasters, 1996 Grandmaster of the Year. He is a pioneer of American Karate, currently celebrating 43 years in the Martial Arts, and the ten year anniversary of the founding Tenshi Goju. A system deeply routed in traditional Japanese Goju-Ryu, with influences from U.S.A. Goju and extensive revisions and additions to the breakdown of the techniques found in the Katas.